My Kroger Health Insurance Fund is $17M in Debt. What This Means For the Future

It has been an interesting week at work.  I have worked at Kroger for the last few years and have enjoyed my time there.  I have had several different positions, obtained 3 pay raises in less than 2 years and enjoy pretty good benefits as an employee.  I am also a member of UFCW 1000, a union that works on behalf of Kroger employees and for the most part has done a good job protecting me and my benefits.

That may be starting to change.  Let me walk you through what has happened this week and then let me tell you my opinion on what this means.  I promise by the end of it you will see the connections to the overall theme of this blog.

What Happened So Far 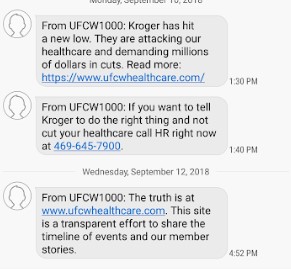 It all started on Monday when the union sent out 2 mass texts warning all the members of the union that Kroger was attacking my healthcare and demanding millions of dollars in cuts and asking me to call my HR dept and demand that Kroger “do the right thing”.   On Tuesday , we had a meeting at Kroger telling us their side of the story which was the fund that both Kroger and the union pay into to cover healthcare costs for employees was $17M in debt.  Both Kroger and the union are contractually obligated to cover half the shortfall, Kroger paid their half of $6.8M and the union has not yet paid their half.  Plus, according to the union’s timeline of events you can see at  the bottom of this page, they don’t seem to feel obligated to pay their half.  So at this point, our health coverage is a bit in the air with both sides threatening either an increase in fees, cut backs in benefits like dental and vision, or both.  Oh, and it seems the union blocked an attempt to have the fund audited by an independent third party, never a good sign.

This is Going to Happen More and More Often

Here is my opinion of what happened.  I don’t think there was any malfeasance or embezzlement of funds on either side. (I could be wrong about that but Hanlon’s Razor will probably apply here)  I think Kroger accrued millions of dollars of medical bills from its employees than it anticipated and everyone was caught off-guard.  Why do I think that?  Because this is the trend we have been seeing across the nation.  We are a country that has done nothing but get sicker and fatter as the years go by and we are being served by a medical establishment that is far too comfortable prescribing pills that mask symptoms instead of educating lifestyle and dietary changes that will actually cure disease.  The costs for those pills and other medicines have been borne by insurance companies and insurance companies are faced with the prospect of either going broke or pushing more of the cost back on to the public.

Our Country Will Break Under the Weight of its Own Weight

We have already seen cases of people DYING because they can’t afford something as basic as insulin.  What is going to happen as T2D instances continue to rise at astronomical rates?  The cost of insulin will continue to rise to the point where insurance will be unable to cover a substantial portion of the cost.  Then what happens?  Nothing good.  Medicine becomes more expensive as demand rises and the poorest will be the first to go without.  And that’s just insulin.  The same market forces will also apply to heart medications, blood pressure medications, and virtually any other life saving drug.  How many people over the age of 40 do you know that don’t have a regular daily medication they have to take?  Multiply that across a nation of 300 million people and growing and the numbers start to look VERY scary.

It Doesn’t Have to Be This Way

I have seen first hand this week the panic that can set in on hard-working middle class Americans when their health benefits are threatened.  I sat at a table yesterday as a mother who was newly made single this year after her husband passed away from cancer worried about how to afford the dentist visit her son needed.   Another started making plans to get her eyes checked before her vision insurance was cancelled.  But it doesn’t have to be this way.  There are simple lifestyle changes you can make that drastically reduce your need for medications.  Let’s walk through them.

I know these things seem really simple and rudimentary but they work.  You can read my story here but this is essentially how I lost 200 lbs, got rid of my Metabolic Syndrome and cured my wife’s Type 2 Diabetes.  Diet is by far the most important aspect to this, just stop eating crap!

If anyone of you have had similar experiences with your insurance being changed or healthcare costs increasing, I would love to hear your story in the comments below.  Thanks!

2 thoughts on “My Kroger Health Insurance Fund is $17M in Debt. What This Means For the Future”