Why PopSci is Wrong About the Ketogenic Diet

I’ve been eating keto for a while now.  LCHF for about 4 years and full on keto for about 2 and a half.  In that time I have lost 200 lbs, reversed my metabolic syndrome and seen my wife cure her Type 2 Diabetes.  I have regained a health I never really had in the first place and become a student of nutrition and how the body reacts to food.

In my personal journey I have encountered a lot of nay-sayers about this particular way of eating.  Mostly people who are absolutely wedded to the idea that you just need to eat less and move more to lose weight or, far more vociferously, Vegans.  I get it.  It’s a new idea and new ideas can be met with resistance.  But rarely do I come across an article that is so aggressively bad as the one that appeared in PopSci this week.  It really surprised me because my previous impression was PopSci was a site that tried to make science popular or easy for the public to understand and digest.  Now it appears they’ve gone the way of Buzzfeed and just try to wrote provocative articles for the clicks.

Let’s go through some of the dumber things author Sara Chodosh says and try to correct the record.

“It was supposed to treat severe epilepsy. And as a medical treatment, it was only intended to be administered under the supervision of trained nutritionists and physicians.”

While a ketogenic diet was used to treat epilepsy, that’s not what is was supposed to do.  It was supposed to be the normal way humans ate for tens of thousands of years before we invented large scale agriculture.  Epilepsy was just the first disease that was discovered to be caused by all those processed grains and sugars.  Now we know there are a host of diseases caused by these foods, most directly T2D and Metabolic Syndrome with more science coming about every day about its ability to help with cancer, arthritis, and virtually every other long-term chronic disease.  This is a very important point, when we eliminate sugars and grains, we aren’t treating a disease, we are eliminating the cause of a disease.  In other words, Keto doesn’t cure diseases as much as stopping the Standard American Diet causes them.

As for it needing to be administered under the supervision of trained nutritionists and physicians, this just isn’t true.  There are plenty of tools like breathe meters or ketone strips that can help you measure your ketones.  But most importantly, following the advice of trained nutritionists and physicians is what got us all into this mess to begin with.

“Researchers aren’t exactly sure what those differences are, but Fung says it’s so hard to get adults into deep ketosis (which is likely deeper than a dieter’s target) that often nutritionists don’t even attempt it as a therapy.”

Goodness.  It isn’t hard at all to get into nutritional ketosis.  It might be difficult to get your ketone levels above 5 but all you need is .5mmol to enjoy most benefits.  Statements like this reveal 2 issues.  #1 The author clearly hasn’t made the attempt to try the diet otherwise she would know how easy it is and #2 here is the problem we have with most nutritionists.  A ketogenic diet isn’t taught in school so most health professionals don’t know what it is, how to achieve it or what the benefits are.

““Keto is not easy to maintain, it’s not a palatable diet,” says Andrea Giancoli, a dietician and nutrition consultant in California. Getting 80-90 percent of your calories from fat—which is what’s generally required for keto—is actually difficult”

First of all, you don’t need 80-90% to come from fat.  You can get into nutritional ketosis a about 60% fat as long as carbs are kept below 20 grams a day.  The rest can come from protein.  As for it not being a palatable diet, this again shows that no one in this article has actually done it.  I have done this for years and there is a ton of variety and Amazon is full of Ketogenic cookbooks.  Maria Emmerich’s output alone would take you a lifetime to go through.  Even if there wasn’t as much variety as there is, give me a grilled steak with lots of salt and butter and I’m good.

But here’s the thing: your body really really doesn’t want to run out of glucose.

Your body is not in any danger of running out of glucose.  Once you are fat adapted, you only need a VERY small amount of glucose to fuel the parts of your brain that need it and you can get more than enough from even a few vegetables.  But here’s the thing, even if you go full carnivore and don’t eat a single carbohydrate, your body can make glucose out of protein.  Not your muscles, that would be dumb.  That’s like needing to be warm and burning the furniture when you have a pile of wood nearby.  That incoming food will be used for what it needs to be used for first before the body starts dealing with stored fat or protein in use in muscles and other structures in the body.  You need to be actually starving for that to happen.  Not like in ketosis, more like in a concentration camp type of starving.

“If you give your body any more than the absolute minimum amount of protein that it needs, it will immediately break it down into carbs.”

Uh, no.  I would refer you the work of Dr Ted Naiman but if you eat more than the minimum, the body finds things to do with the protein.  Gluconeogenesis only happens on a as-needed basis so if you don’t need glucose, protein isn’t turned into glucose.  Your body uses it and this is one of the reason a ketogenic diet is muscle-sparing.  It is much more difficult to lose muscle on a ketogenic diet than a SAD diet because the body uses any excess protein you eat to maintain muscle as well as a other things.

Dingdingding.  Here’s the core issue.  The fear around saturated fat.  Saturated fat is perfectly healthy as long as you don’t eat it with carbs.  How do you think humans survived for most of their evolutionary history?  Our ancestors did not grow broccoli, they hunted animals.  No wonder these people think a ketogenic diet is monotonous if they are avoiding animal fats.  What are they doing?  Just eating avocados and olives?  These nutritionists need to go find someone who knows what they are talking about and get some education about keto before they give another interview.

Of course, ketosis itself comes with its own risks. Circulating ketone bodies make your blood too acidic, and your body will draw calcium from your bones as a buffer.

There are few to no studies on healthy adults undertaking a non-therapeutic ketogenic diet, but studies of epileptic children on the diet show increased bone demineralization and high calcium levels in the blood.

This is not because of the diet but because these kids were given their nutrition in the form of a shake that was deficient in several minerals, most notably selenium.  If they had just given them steak, they would not have had these issues but man always thinks they can do better than nature.  I’ll just stick to the foods nature provided thank you very much.

Without the fiber from whole grains and fruits, you’re also likely to get constipated and have other digestive issues.

No, you’ll be fine.  Fiber has been shown to make constipation worse.

Plus you need fiber to maintain a health gut microbiome, which tends to come from the kind of whole grains that you can’t eat on the diet, and though it is possible to get enough fiber from vegetables on the keto diet you have to carefully monitor your eating to ensure that.

No, your gut microbiome will flourish once you get rid of all that sugar and processed grains.  It doesn’t need fiber at all.  Here’s a whole book written on the subject.

Though you may very well lose weight, most people on most diets gain the weight back (and sometimes even more) when they go off the diet, which many dieters do because radical shifts in what you eat are hard to maintain for long periods of time.

Finally something she is right about.  If you go back to the SAD diet, you will regain the weight.  Don’t do that.

This article did a great job of showing who ignorant the rank and file medical providers (and reporters) are about what the ketogenic diet is.  The author didn’t understand the difference between nutritional and therapeutic ketosis and none of the people she interviewed corrected her.  She hasn’t tried the diet herself or even at least brushed up on the latest research.  She just parroted the exact same dietary advice we have been given for decades that made everyone fat in the first place.  No thank you, I’ll stick to fat and bacon and let you keep the diabetes. 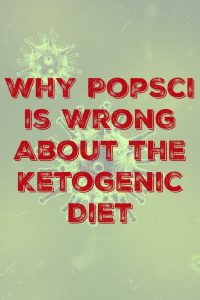 2 thoughts on “Why PopSci is Wrong About the Ketogenic Diet”