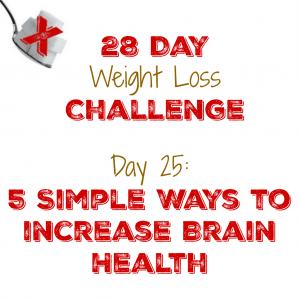 You have probably heard people say that they are likely to get disease x because it runs in their family.   We know that genetics plays a role in many diseases but what you may not know is the role of epigenetics in your health.  Epigenetics is the study of the the different marks in your DNA that that tell certain genes when and how strongly they should become active.

We now know that our day to day life style choices play an important role in our health at the epigenetic level.  Exercise, sleep, diet, stress, even our relationships play huge roles in health.  In fact we can influence up to 70% of the genes that determine our overall health just by changing those factors that influence our epigenetics.

Did you know that you can make new brain cells?  It was long thought that nerves and brain tissue were immutable and unchangeable and once they were dead, they were dead forever.  New science called neuroplasticity tells us that you can actually create new brain cells by provoking a gene located on chromosome 11 to create “brain-derived neurotrophic factor,” or BDNF.  BDNF plays a key role in creating new neurons. But beyond its role in neurogenesis, BDNF protects existing neurons, ensuring their survivability while encouraging synapse formation, the connection of one neuron to another—a process vital for thinking, learning, and higher levels of brain function. Studies have demonstrated decreased levels of BDNF in Alzheimer’s patients, which, based on an understanding of how BDNF works, should not come as a surprise. What is perhaps more surprising is the association of BDNF with a variety of neurological conditions, including epilepsy, anorexia nervosa, depression, schizophrenia, and obsessive-compulsive disorder. We now have a firm understanding of the factors that influence our DNA to produce BDNF. And fortunately, these factors are mostly under our direct control. The gene that turns on BDNF is activated by a variety of lifestyle habits, including physical exercise, caloric restriction, following a ketogenic diet, and the addition of certain nutrients like curcumin and the omega-3 fat DHA.

Physical exercise is one of the most potent ways of changing your genes; put simply, when you exercise, you literally exercise your genes. Aerobic exercise in particular not only turns on genes linked to longevity, but also targets the BDNF gene, the brain’s “growth hormone.” More specifically, aerobic exercise has been shown to increase BDNF, reverse memory decline in elderly humans, and actually increase growth of new brain cells in the brain’s memory center.

In January 2009, for example, the Proceedings of the National Academy of Science published a study in which German researchers compared two groups of elderly individuals—one that reduced their calories by 30 percent and another that was allowed to eat whatever they wanted. The researchers were interested in whether changes could be measured between the two groups’ memory function. At the conclusion of the three-month study, those who were free to eat without restriction experienced a small, but clearly defined decline in memory function, while memory function in the group on the reduced-calorie diet improved dramatically.

If restricting your calories sounds difficult, keep in mind that when you were eating a Standard American Diet, a big chunk of your daily calories were coming from sugar.  Once you cut out the sugar and grains, I can almost guarantee you that you also cut your total caloric intake.

Eating healthy fats and no carbs helps the body create ketones which are an alternate fuel source for the body from glucose.  While science typically has looked at the liver as the main source of ketone production in human physiology, it is now recognized that the brain can also produce ketones in special cells called astrocytes. These ketone bodies are profoundly neuroprotective. They decrease free radical production in the brain, increase mitochondrial biogenesis, and stimulate production of brain-related antioxidants. Furthermore, ketones block the apoptotic pathway that would otherwise lead to self-destruction of brain cells.

To quote Gary Taubes, “In fact, we can define this mild ketosis as the normal state of human metabolism when we’re not eating the carbohydrates that didn’t exist in our diets for 99.9 percent of human history. As such, ketosis is arguably not just a natural condition but even a particularly healthful one.”

Curcumin is the active ingredient in the spice turmeric and is an antioxidant, anti-inflammatory, anti-fungal, and antibacterial agent. Most interesting is its ability to increase BDNF in people who use it.  We now think it is the reason why rates of dementia are so low in cultures where turmeric is an important part of the diet.

DHA is another brain boosting molecule that has been shown to be important to brain health.  More than 2 thirds of our brain is fat and a quarter of that fat is DHA.  Adequate DHA in our diet is important for many of the membranes and synapses within the brain.   It also has anti-inflammatory qualities in the brain and the entire body.  DHA is synthesized by the body from an omega-3 fatty acid called alpha-linolenic acid.

We also know that challenging yourself intellectually leads to long-term brain health so read a book or do a crossword puzzle.