Is depression genetic?  We’ve been told it is or at least has a genetic component for years.  In 1996 a paper was published blaming depression on the presence of the SLC6A4 gene.  This gene interfered with the transport of serotonin, the hormone responsible for feelings of happiness and well-being.  The logic was pretty solid, if serotonin transport was inhibited, you weren’t as happy and therefore more susceptible to depression.

Except that’s not what is happening.  In a new paper that looked at 18 different genes and data from much larger groups of people, they discovered there is no statistical correlation between any of the suspected genes and depression.  The problem here is the idea that depression has a genetic component has been scientific dogma for decades.  Hundreds of papers have been written about how these genes interact and affect mood.  According to one researcher, it’s as if they’d been “describing the life cycle of unicorns, what unicorns eat, all the different subspecies of unicorn, which cuts of unicorn meat are tastiest, and a blow-by-blow account of a wrestling match between unicorns and Bigfoot.” Which is probably the greatest quote I’ve ever heard from a research scientist.

What does this mean for depressed people?

This is very good news for you if you suffer from depression.  If you believe you are depressed because of your genetics, what can you do about that?  Genetics are the core of who you are, if you are genetically coded to be permanently sad, you are going to be permanently sad.  But if this new evidence is true, then whatever is causing your depression is in your control.  You can actually do something about it.

I want to talk in a minute about what I believe are the primary factors we can affect that can improve mental health but before I do, let me try to deal with the most common push-backs I get when I discuss this issue.  You might have a real chemical imbalance in your brain that requires medication to deal with.  I’m not suggesting people should go off their medications or do make any drastic changes without a doctor’s supervision.  I always remind myself of my Type 1 diabetic aunt that went to a tent revival and was “healed” of her diabetes by the preacher.  She immediately went home and in faith threw away her insulin.  She ended up in the hospital in a few days.  I am very sensitive to the idea that some problems require medications but I have also seen with my own eyes the amazing power of things like diet and exercise on the brain.

I also know that suggesting someone can change their mental health by changing their habits can be a difficult idea for someone to receive because you are giving this advice to someone with compromised emotional or mental health.  Sometimes someone is so depressed that even f you gave them a step by step map out of their depression, they just don’t have the ability to follow the map.  I can’t tell you how many times I’ve told someone some simple advice and been told something along the lines of, “You don’t understand.  I have a real problem, this isn’t just going to be fixed with diet and exercise.”  My next question is always, have you tried changing your diet and exercise?  Of course, the answer is always no, followed by another excuse.

Having said that, I have seen with my own eyes many times the power of a low carb diet and regular, strenuous exercise to improve mood.  This along with regular sun exposure and spending time with loved ones can be powerful tools to conquer depression.

Eating a Ketogenic, or at the very least a low carb diet that includes adequate red meat, can have amazing affects on mood.  The lack of sugar and grains will reduce inflammation and the red meat will give the raw materials the body needs to make all the hormones and transmitters necessary for optimal health.  I am definitely not the expert here but if you would like to learn more, I would check out Dr Georgia Ede’s website.  The work she has done in the field of mental health and diet is truly ground-breaking.

Almost any exercise has been shown to have an effect on mood so the most important aspect is that you do it regularly.  Not only are you producing endorphins that improve mood but sticking to a long term exercise program will give you sense that you are capable of setting a goal and reaching it.  In my own journey, it was the fact that I was able to make small, incremental steps to meet my big goal of losing 200 lbs that had the biggest impact on my mood.

There is a reason why people that live in areas without a lot of sun are diagnosed with Seasonal Affective Disorder at higher rates than people who live near the equator.  Not only will the sun give you higher levels of Vitamin D but it will get you outside.  A little fresh air and getting your toes in the grass will do wonders for your mood.

People love you.  There is someone in your life that you love and loves you, whether that be a parent, sibling, spouse, or friend.  Spend time with those people and connect.  We are social creatures that don’t do well in isolation.  You need some level of intimacy in your life to be emotionally whole and one of the worst things about depression is it causes us to turn inward and shut people out of our lives.

Depression is a big deal and affects millions but there are things you can do to get better.  Depression is not genetic and can be changed by changing your habits! 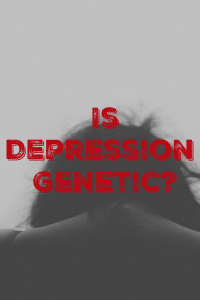