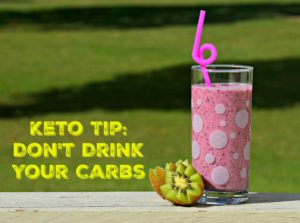 If there is anything that tripped me up in those early days of keto, it was what I drank.  I got over my addictions to sugary foods and desserts relatively quickly but I still liked my sweet tea and Coke Zero.  In fact, if there is anything I struggle with even today, it’s sweet drinks so if that’s something you fight with, you are not alone.

Why Drinking Sugar is Worse Than Eating It

The problem with drinks containing any sugar or carbs in it is you are getting a hit of sugar without any of the fiber that comes with food to blunt the glucose hitting your liver.  So your liver gets a massive dose of sugar all at once instead of having it slowly absorbed over time if you had eaten the same amount of sugar or carbs in a piece of food.  This is why someone who drinks a lot of beer gets a “beer gut”.  All those carbs from the beer hit the liver all at once and the liver just starts packing it away into fat cells as fast as it can.  The nearest fat cells to the liver are of course around the midsection so that’s where most of the fat gets stored.  You would see the same phenomenon in someone that drinks a lot of fruit juice for the same reason.

What About Artificial Sweeteners?

You might need to do a little experimentation to find out which artificial sweetener works best for you.  In my house, my uses Xylosweet in her morning coffee and my Walmart just recently started carrying a liquid Stevia that has quickly become my new favorite thing.  Here is something similar on Amazon.

The important thing here is to make sure that you are not drinking anything that is causing an insulin reaction that will kick you out of ketosis.  So drink distilled liquor instead of beer or wine, or if you must drink wine make it as dry as possible.  Be careful that if you are sweetening a drink that you are using a sweetener that won’t cause an insulin reaction.  And finally, as a general rule, drink more water than anything else.  You can never go wrong with water.