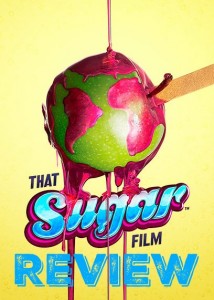 I finally took the time to sit down and watch That Sugar Film this week and I thought you might like to hear my thoughts on it.  I really liked most of it but had a few issues with a few bits and pieces.  You can watch my full review below and I’ll type up the highlights if you’d prefer to read them.

That Sugar Film is the story of documentarian Damon Gameau’s decision to eat 40 tsp of sugar a day, the sugar consumption of the average Australian.  If you’ve seen Super Size Me, you are already familiar with the layout of the film because it’s very close to the same pattern except with sugar as the villain instead of McDonalds.

It’s Entertaining – The one thing that is immediately clear as you watch this film is that great effort has gone in to making this film as entertaining as possible from start to finish.  There are musical numbers, sketches, short but compelling stories and a throughline of the effect of sugar on Gameau’s body and life.

It’s Visual – Rarely do we get any kind of fact or statistic given to us that it doesn’t also have some kind of visual aid to help us grasp what is going on.  When we are told Australians eat 40 tsp of sugar a day, we get 40 tsp of sugar stacked on a table.  At one point, instead of eating the food with the sugar included, he eats food without sugar and spoons on an equivalent amount of sugar and eats it like that.  For instance, instead of eating a granola bar, he eats the same amount of sugar in a granola bar sandwiched between 2 watercress crackers in a sugar sandwich.  It’s actually a little stomach-turning to watch.

We See the Stories of Several Different People Groups – From Aboriginal tribes on the Outback to Kentucky teens in the Appalachian Mountains, we see how sugar effects people across the globe.

Do People Really Eat 40 Tsp of Sugar a Day? – When I saw that pile of sugar that Australians supposedly eat per day, my jaw dropped.  That was a HUGE amount of sugar!  But when I decided to do some research after the film, I couldn’t find anything to substantiate that claim. What I read put it at about 19 tsp a day, or less than half of what Gameau claimed.  That’s still a lot of sugar but let’s get our facts straight.

Can Mountain Dew Cause That Much Damage by 18? – There was a Kentucky teenager in the film who drank Mountain Dew his entire life and had the most awful looking mouth I have ever seen in my life.  The teeth he still had were rotten and black but mostly it was just a mouth full of bloody gums.  I’ve known people that have consumed soft drinks for twice as long as this kid and they don’t have teeth anywhere near like this.  But you know who does have teeth like that?  Meth users.  You know where you can find all the meth you want for dirt cheap? Kentucky.  I don’t know anything about this kid and I might be totally wrong, but that sure looked a lot more like meth-mouth than Mountain Dew-mouth.

Experts? – There were interviews from credentialed and respected nutritionists, dietitians, and food and health reporters that had very good things to say.  There were also interviews from people that really had no business in any kind of serious documentary.  I go into detail in the video above but the documentary did a terrible job of letting you know which people in the interviews you should listen to and respect their opinion and who have not done any research whatsoever and are generally considered crackpots by the larger scientific community.  It was so bad that I really had to question a lot of other information in the documentary because he did such a bad job of bringing reputable experts in to give their insights.

Bottom line, I liked this film.  It’s fast paced, has great information, and is easy to watch and digest.  While it covers a lot of the same ground as other anti-sugar documentaries, Gameau has his own spin on it and adds his personal spin on it.  I would definitely check it out, especially if you have Amazon Prime because it’s totally free.

What did you think?  Let me know in the comments.