Day 21: What is Type III Diabetes? 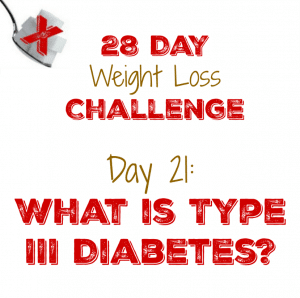 You have heard me say many times throughout this 28 Day Journey that more and more evidence is mounting that Alzheimer’s and other dementia diseases are basically Type III Diabetes.  In other words, the same root causes that cause Type II Diabetes are causing mental problems as well.

It’s important to note that Diabetes doesn’t cause dementia, just that both issues spring from the same well of causes.  They are both coming from foods that force the body to create new metabolic pathways that are harmful to the body.  In the case of Alzheimer’s, the body’s response to chronically high levels of insulin is to create plaques in the brain that essentially take over and replace brain cells.  It’s worth noting that the obese are at a much higher risk of impaired brain function and diabetics are twice as likely to develop Alzheimer’s.

New estimates say that Alzheimer’s will affect 100 million people by 2050, a crippling number that could bankrupt our healthcare system and our nation.  And that doesn’t include the people with Diabetes that don’t contract dementia.

New research indicates that having dementia means that throughout your life, you probably had one or more of the following risk factors.  You lived with chronic high blood sugar levels even in the absence of diabetes,  you ate too many carbohydrates throughout your life, you opted for a low-fat diet that minimized cholesterol, or you had undiagnosed sensitivity to gluten, the protein found in wheat, rye, and barley.

When talking about gluten, most people think that people with Celiac’s disease are the only ones that need to worry about it.  This is because gluten is only thought of in terms of gastrointestinal health but new research indicates that gluten also has an effect on the brain and that we are all sensitive to gluten to greater or lesser degrees.

Dr Perlmutter, the President of the Perlmutter Health Institute says “Many of my patients reach me once they have “tried everything” and have been to scores of other doctors in search of help. Whether it’s headaches and migraines, Tourette’s syndrome, seizures, insomnia, anxiety, ADHD, depression, or just some odd set of neurological symptoms with no definite label, one of the first things I do is prescribe the total elimination of gluten from their diets. And the results continue to astound me.”

Researchers have know that the cornerstone of all degenerative conditions, including mental conditions, is inflammation.  What has been only recently been figured out is what exactly is causing the inflammation.  Turns out is was gluten and carbs in general.

Inflammation is supposed to be something that only shows up for a short time in response to an issue, helps the body deal with that issue, then goes away.  When we constantly introduce gluten into our system, we are keeping our bodies inflamed for long periods of time, causing long term damage.  We already deal with inflammation in our bodies as a way to handle certain diseases.  For instance, arthritis is caused by inflammation in the joints and we handle that with aspirin, which is an anti-inflammatory.  Asthma is handled with anti-inflammatory inhalers.  New evidence shows that taking an aspirin for a heart condition works, not because it thinned the blood but because it reduces swelling in the blood vessels.
But the idea that inflammation causes mental disorders has only recently begun to catch on.  But in fact, studies dating back as far as the 1990s show that people who have taken nonsteroidal anti-inflammatory medications such as Advil (ibuprofen) and Aleve (naproxen) for two or more years may have more than a 40 percent reduced risk for Alzheimer’s and Parkinson’s disease. At the same time, other studies have clearly shown dramatic elevation of cytokines, the cellular mediators of inflammation, in the brains of individuals suffering from these and other degenerative brain disorders. Today, new imaging technology is finally allowing us to see cells actively involved in producing inflammatory cytokines in the brains of Alzheimer’s patients.