Day 22: What is Gluten Sensitivity? 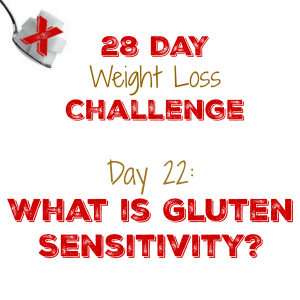 Gluten is the protein composite in some grains that acts as a glue that holds breads together.  It makes muffins fluffy or allows you to stretch a ball of pizza dough out into a flat disk.  Gluten gives bread products it’s chewiness and allows bread to rise when leavened.

It is now used as a food additive, giving cheese spreads or margarines their smooth texture and is used to stabilize gravies or sauces.  It now also being added to makeup like mascara and hair care products because of the volume it adds.

If you are sensitive to gluten (and as many as 1 in 4 could be) then your body could react in several different ways.  Your body could not be able to digest gluten and break it down which could wreak havoc on your lower intestine.  Those who experience symptoms complain of abdominal pain, nausea, diarrhea, constipation, and intestinal distress.  Some don’t have GI distress but there might be issues with the nervous system.  Your body could try to mark the gluten as a foreign invader and increase inflammation to deal with it causing a wide range of issues from headaches to joint pain to leaky gut.  In some cases, long term inflammation in the brain can lead to Alzheimer’s disease, Parkinson’s disease, multiple sclerosis, and even autism.

Of particular note is Dr. Hadjivassiliou and his long time work on gluten sensitivity.  In his 2010 article in Lancet Neurology, he talks about how he is using gluten free diets to cure a wide range of neurological issues and brain dysfunctions.  He issues a clear call for doctors to at least be aware of what gluten does to their patients and rule out a gluten sensitivity before proceeding to other treatments.

Let me share what Dr. Rodney Ford of the Children’s Gastroenterology and Allergy Clinic in New Zealand proposed in his 2009 article aptly titled “The Gluten Syndrome: A Neurological Disease”:  The fundamental problem with gluten is its “interference with the body’s neural networks… gluten is linked to neurological harm in patients, both with and without evidence of celiac disease.” He added, “Evidence points to the nervous system as the prime site of gluten damage,” and he boldly concluded that “the implication of gluten causing neurologic network damage is immense. With estimates that at least one in ten people are affected by gluten, the health impact is enormous. Understanding the gluten syndrome is important for the health of the global community.”

At the heart of gluten sensitivity and almost any other chronic disease is inflammation.  We know that gluten causes inflammation and the evidence is mounting that it is a cause of a medley of health challenges, from chronic daily nuisances like headaches and brain fog to serious ailments such as depression and Alzheimer’s. We can even make a case for linking gluten sensitivity with some of the most mysterious brain disorders that have eluded doctors for millennia, such as schizophrenia, epilepsy, depression, bipolar disorder, and, more recently, autism and ADHD.

It’s also worth noting that we are not eating the same grain we have for millennia.  Grain has been cross-bred and modified and now contains up to 40 times as much gluten as it did 500 years ago.  The reason is gluten can be addictive and release endorphins that make us feel good when we eat it.  Combine that addictive gluten with addictive sugar and it’s no wonder we want jelly on our toast and frosting on our cake and eat donuts and other sweets.

One thought on “Day 22: What is Gluten Sensitivity?”