Does a Ketogenic Diet Cause Inflammation?

In 2006, The American Journal of Clinical Nutrition released a study headed up by Dr Carol Johnston that seemed to show that the Ketogenic diet increased the amount of inflammation in the bodies of their test subjects.  Since then, every once in a while someone will cite this report as proof that the Ketogenic diet causes inflammation.  Let’s take a look at this study and see what it says.

The key line here is the increase in the amount of Arachidonic acid in the blood of the ketogenic dieters.  Arachidocic acid is an Omega-6 fatty acid known to promote inflammation in our bodies.  So what does that mean?  It means they were eating some wildly poor quality meat on this diet that contained large amounts of Omega 6 and very little offsetting Omega 3 fatty acids.

Another clue was in the description of the nutritional content of the diets. “The NLC diet had ≥ 67% of the recommended dietary intakes for the micronutrients; the KLC diet was less nutritious: fiber, vitamin E, folate, iron, magnesium, and potassium were <67% of recommended dietary intakes.”  While we can’t see exactly what the participants ate, this description of the nutritional content of the diet tells us that the ketogenic people were probably not being counselled to eat either leafy greens or organ meats which is typically where those nutrients come from on a ketogenic diet.  (Either there or from very high quality fats which I’m pretty sure they weren’t getting either)

In short, this study put participants on a diet that while being technically ketogenic is not the whole foods diet consisting of high quality fats that most practitioners of the ketogenic diet strive for.

Something else that is mentioned in the results is that the “perceptions of vigor were more adversely affected by the KLC than by the NLC diet.”  It should be noted here that this was only a 6 week study so participants were probably only just beginning to be keto-adapted and were probably experiencing the “keto flu” that usually accompanies the transition phase of the diet.

Even with all these caveats it is still surprising that there was an increase in the amount of inflammatory markers because one thing that the ketogenic diet has been shown to do time and time again is to decrease the total amount of inflammation regardless of food quality by reducing the amount of free radicals created by cells.  Ketones are a “cleaner burning” energy source than glucose so less metabolic waste is produced as they are used for energy which in turn produces less inflammation throughout the body.  My guess would be that if this experiment would have been continued for another 6-8 weeks, they would have seen the typical drop in inflammation usually seen on the ketogenic diet.

I can tell you from personal experience that one of the things that happened when I first started the ketogenic diet was I lost s much inflammation that my wedding ring flew off my finger after just a few weeks eating this way.  It wasn’t the weight loss, it was just the loss of inflammation in my fat sausage fingers that made them small enough to lose my ring forever.  Still kind of sad about it.

If you are at all concerned about inflammation, you can request a CRP Test from your Dr which will measure the amount of C-Reactive Protein in your blood, a marker of inflammation.  Taking a test both before you start the diet and perhaps 2 months after you start will give you a good idea of your personal levels of inflammation and how the ketogenic diet is affecting you. 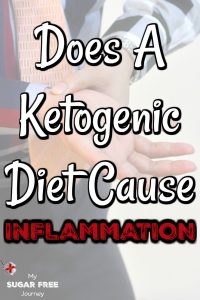 4 thoughts on “Does a Ketogenic Diet Cause Inflammation?”