Self-Discipline and the Ketogenic Diet

I am a huge fan of Joe Rogan and his podcast and have listened to every single episode he has done for years which is really saying something when you see his average episode is 3 hours long.  I love his take on the world and the entertaining way he is able to communicate his world view.  However, in a recent interview with Layne Norton and Dom D’Agostino he said something that has absolutely been stuck in my mind for weeks and I need to address it here.

First to set the stage, this was a conversation between 2 well respected scientists; one of which (Dom) studied the Ketogenic diet and the other (Layne) believed in a more carb-centric, eat 6 times a day model of eating.  The conversation was fascinating even if Dom seemed to never talk and Layne seemed to never shut up.  At one point Layne was saying that all diets have some people adhere to them and some people fail at them and Joe made the point that it was a primarily a discipline issue that caused adherence to a diet.

You can see the exchange here.

Here’s the problem.  Willpower and self-discipline are finite resources and have to be developed over time.  I mean it would be great if every time someone had a problem, you could just say “Stop It” and they would stop.  You’re fat, stop eating so much.  Done.  Wipe your hands and move on to the next problem.  What a wonderful world that would be!

Speaking as a formally morbidly obese 400 lb person, let me just tell you that if it was as easy as being told to stop eating so much, no one would ever get as fat as I got.  I would start a new diet and go strong for a while and then slowly but surely the plateaus would start, the willpower would dissipate and I’d right back to where I started if not worse.  It sucked!  What I didn’t realize was I was working against my own biology and in order to succeed, I first needed to adjust my hormones.

I’ve written about this at length in the past so very quickly, let me describe what is happening to you when you eat a meal that increases insulin.  Insulin’s job is to move energy out of your bloodstream and into a cell to be used as fuel or into a fat cell to be stored as fat for later use.  Over the decades of eating a diet that constantly spikes your insulin, the muscle cells eventually get insulin resistant so energy doesn’t flow into a muscle cell as readily.  If muscle cells aren’t getting the energy they need, you feel lethargic and just want to sit on the couch.  This isn’t a willpower or self-discipline issue, this is a hormonal issue.

I’m sure you’ve felt this.  You start a new exercise program you are excited about (usually on January 1st) and after a few weeks it fades away.  That was certainly my story over and over again until I addressed the root of the problem.  I stopped eating foods high in sugar, starch, and grains and my muscles became more insulin sensitive.  I no longer had to talk myself into exercise, it is now a normal part of my life and I start to feel “antsy” when something happens to prevent me from exercising.  (Usually a small injury)

I totally get where Joe Rogan is coming from, it’s awesome to be able to blame everyone else’s problems on a lack of self-discipline.  Self-discipline is important and certainly a skill that can be improved upon, I remember a Bible verse I memorized to help me on my journey, “I beat my body and make it my slave so that after I have preached to others I myself would not be disqualified for the prize.”  Those kind of mental mantras help but will ultimately fail if your body is working against you.

Think of it this way, if you say someone in the ocean drowning with a huge rock in each hand, wouldn’t you tell them to drop the rock so they can focus on swimming to shore?  If someone is struggling with their weight, the constant spikes of insulin are the rocks.  Don’t yell at them about their lack of discipline or get on to them about eating too much.  Instead, teach them to drop the rocks.  Teach them about insulin’s ability to make us fat and lazy and that the key to swimming to shore and having the body you want is to drop the rocks.  Lower insulin by cutting out sugar, grains, starches and PUFAs and start eating real food with a focus on saturated fat.  Tell them about how bacon, steak, eggs, butter, meat and veggies are the key to seeing the pounds come off and sty off.

But most of all, if you are someone who has struggled with your weight, I want to help.  You can leave a comment below or come join or FaceBook support group but whatever you do, get the help you need!

(Also, if Dom ever reads this article, if you ever have an opportunity to do something like this again and your opponent says “We will agree on a lot of things” then try to figure out where you disagree and talk about those things.  That whole interview could have been a lot more productive.) 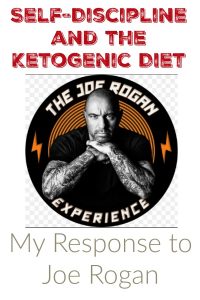