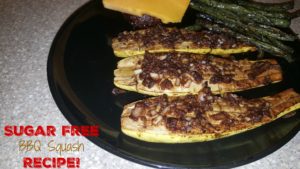 I fired up the grill yesterday for some hamburgers and wanted to try something a little different for the veggies.  I had run across a video on YouTube for BBQ Eggplant that I thought was interesting but I had yellow squash instead of eggplant.  I was a bit worried about that but it turned out awesome.  It was simple to make and full of flavor.  Here’s what you do.

Dice a half a onion and 2 cloves of garlic and place in bowl with 1 tsp of cumin, 1 tsp of chili powder and a half a cup of soy sauce.  Stir it up and that will be your sauce

Then get 2 yellow squash and cut in half lengthwise.  Then score the meat of the squash in a checkerboard pattern being careful not to cut all the way through to the skin on the backside.  I did 3 long cuts along the length of the squash and smaller perpendicular cuts about a half an inch apart.

Then put in on the grill over direct eat, skin side down and let it cook for about 5 minutes with the lid down.  Then use a brush to brush on the liquid from the BBQ sauce and let it roast for another 5 minutes.  Then spoon on all the chunky bits from the sauce and let it roast again until it us soft, about 5-7 more minutes.  Then serve it up!  It was vary tasty and certainly gave us a different way to serve squash than our usual way of steaming it.

Just a note, if you have an aversion to soy for any reason, I bet you can get pretty close to the same taste with olive oil and kosher salt.  I haven’t done that yet but I’m sure it would be fine.

You can find the rest of my Sugar Free Recipes here.  If you decide to make this recipe, please take a pic and put it on Instagram and tag @MySugarFreeJrny, I would love to see it!

A tasty way to cook up Yellow Squash with no added sugar or simple carbs. There is also a soy-free variety.