Day 11: What is Bad Cholesterol? 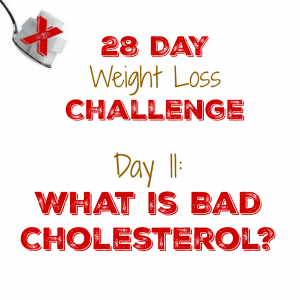 Once upon a time, we were either hunters or gatherers.

Hunters either killed their food or fished it out of the ocean and our liver evolved to handle the energy from that.  If food was in short supply, the liver would convert energy from dietary fat into ketones.  Ketones could be burned for fuel by your cell’s mitochondria or the other organs in your body as needed.  When food was plentiful, excess energy was converted to cholesterol and stored as fat until it was needed again in times of famine.

And then there were the gatherers. They got their food from what they could gather or grow.  These were the agriculturalists.  If food was scarce, all the glucose from the food was immediately taken up by the liver for energy.  If food was abundant, blood sugar would rise, provoking insulin to drive energy into fat cells for storage.  This is the basis of vegetarian diets and can be a perfectly healthy way to eat.

The problem is when we combine these 2 diets and eat them both at the same time.  There are 2 different ways the liver can convert food to energy but when we give it both types of food, fat and carbs, we overload those metabolic pathways and cause damage.  And of course, most of us do this every meal.  Meat and potatoes.  Bread on the side. Hamburger and bun. Etc.

Keep in mind that most foods (with one exception) are either fat or carb.  Meat, fish or poultry?  Fat.  Grains, roots, and potatoes?  Carbs.  Fruits that have fat like olives, avocados or coconut have minimal carbs.  Nuts have fat and a little carbs but lots of fiber to offset the effect of the carbs on your body.  Milk is a small exception but keep in mind we didn’t drink milk until the advent of agriculture.

As heart disease and other health issues began to rise, the race was on for scientists to figure out what was going on.  There were 2 main stories that were beginning to form.  The first came from John Yudkin a British nutritionist that was studying the nature of chronic diseases.  He determined that consumption of sucrose correlated with heart problems and other health issues.  He published his findings in the book Pure, White, and Deadly in 1972.  He followed up with numerous papers detailing how sugar consumption led to heart disease, diabetes, GI disease, eye disease and other inflammatory issues.

Around the same time, Ancel Keys was studying the same issue but was telling the world that it was fat that was causing these same issues.  He issued his famous Seven Countries Study that correlated fat consumption with heart disease.  You probably remember the fallout from that study in low fat foods and “heart Healthy” grains.  But there were some issues with his study.

Through a way too complicated series of twists and turns to talk about here (But read Gary Taubes’ book, Good Calories, Bad Calories for the full story)  Ancel Keys won out and the US adopted the stance that low fat diets were healthier for America.  That’s when the trouble really started.

The big finding of the day was that eating dietary fat led to increased LDL, the so called “bad” cholesterol.  What no one knew at the time was that there are 2 types of LDL.  You had large buoyant LDL, or LDL A, and you had small dense LDL, or LDL B or sometimes called VLDL.  LDL A floats and causes no cardiovascular issues but the LDL B is dense enough to sink and small enough to fit between the blood vessel cells which leads to plaque build up on the vessel walls.  While it’s true that dietary fat will raise LDL, it raises the LDL A that causes no issues.  So what raises LDL B?  Carbs.

This is bad because once we started making low fat everything, all the recipes for our processed foods had to be changed.  Once you take the fat out, food tastes horrible so to make it taste better, sugar is added.  Which drives weight gain and LDL B and the obesity epidemic is off and running.