Day 17: The Government’s Role in Obesity 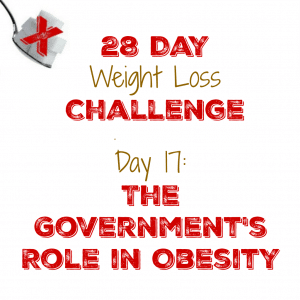 The big food companies are on record as saying that sugar is not the problem.  That’s a calorie just like any other calorie and they key to weight loss is everything in moderation and sugary drinks and processed foods can be a part of a healthy lifestyle.  I think by now we know that’s false but how did we get here?  We didn’t used to be fat, the obesity epidemic has only started being a thing in the last 50 years or so.

The problem is that sales numbers show that the more sugar we add to a product, the more we buy it.  This is why we now have sugar added even to foods that used to be sold without sugar like yogurt and ketchup.  In fact in the early 1900 there was a cereal war between Kellogg’s with their Corn Flakes and Post with Post Toasties.  These were essentially the same product but Kellogg’s sold a lot more simply because they frosted their flakes with sugar.

HFCS hit the store shelves in 1970.  At first we were wary of it but it had a price point at about half of regular sucrose so the almighty dollar won the argument.  President Nixon noted that food prices could be a source of political unrest so he told his Secretary of Agriculture, Earl Butz to take the price of food off the table as a political issue.  He pushed a huge corn subsidy through as part of Farm Bill and now the Federal Government pays farmers to grow corn which makes corn cheaper, which makes HFCS cheaper and when you put HFCS in every food imaginable, it makes food cheaper.  Problem solved!

But then the McGovern Commission, in response to Ancel Keys flawed dietary study, decided to push America to eat less fat.  The problem that when you take the fat out of food it tastes like cardboard so how do you fix that?  You put that cheap HFCS is all your low fat food to make it taste better.

Then in 1980 Hurricane Allen wiped out the entire Caribbean sugar crop.  With sugar prices soaring, Coca Cola had no choice but to take the sugar out of their drinks and put in HFCS.  Once the industry leader did that, pretty much every other drink manufacturer did the same.

In the 1990s HFCS became the most common sweetener in the US.  And while in equal amounts it is no worse for you than table sugar, it’s in everything so we are consuming a lot more of it than we ever did of just regular sugar.

So are their other reasons to add sugar to everything?  Oh yeah.

We want a nice brown piece of meat when we cook out and it’s the sugar in the BBQ sauces that make that happen.   The browning of a piece of meat gives it a tangier, smokier flavor.

Sugar adds texture.  Make a cake with Splenda and it will be sweet but not as fluffy.  Baked bread without sugar won’t rise properly.  Flat wafers without sugar aren’t crispy.  Ice cream without sugar is hard as a brick and soft caramels aren’t as chewy.

Sugar is a preservative and when you are processing food, you want that food to stay on the shelf for a long time without spoiling.  Which is doubly important because when you process food you remove the fiber because fiber limits shelf life and high fiber foods don’t freeze well so you need to put in more sugar to keep anything from spoiling.

2 thoughts on “Day 17: The Government’s Role in Obesity”