Day 16: Environmental Toxins That Cause Obesity 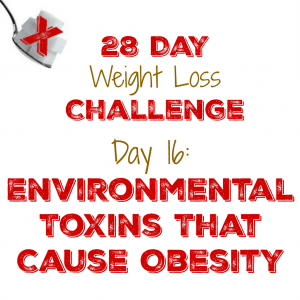 One of the other health trends we have seen at the same time is that our young girls are seeing the signs of puberty happen at younger ages than ever.  There are girls that are growing breasts at as young as 7 years old.  Are the rates of obesity and early onset puberty related?

We know that body fat and the hormone leptin that fat produces are linked to puberty in girls.  Puberty has been coming on average earlier and earlier in girls for a long time and it has generally been attributed to better nutrition.  Also we know girls with very little body fat like dancers, gymnasts and other athletes can delay puberty until they slow down and put on a little body fat.  Girls need that fat to produce leptin which has some role in starting puberty.  Once the fat gets the signal from the hypothalamus to start puberty, the fat tissues begin producing estrogen.  The more fat, the more estrogen and the earlier puberty starts.  This estrogen then promotes the production of more fat in the hips and chest giving women their curves.

Another issue is we can be exposed to estrogen in our environment.  Estrogen is in our food supply, in plastics and in our water.  It used to be used in the pesticide DDT that was banned in the US in 1972 but we can still find traces of its metabolite DDE in the urine of pregnant women, even women born long after 1972.  In fact the concentrations of DDE in a pregnant women’s urine will strongly correlate with their baby’s weight at age 3.  It appears the DDE is actually forming more fat cells in unborn children.

The chemical BPA is also an estrogen and is created when an acid touches a polycarbonate plastic bottle.  So pretty much every bottled liquid in America is tainted with BPA.  BPA concentrations are correlated with obesity in adults.

There are several other substances we are exposed to that correlate with obesity.  Phthalates are used to make plastic flexible so think of that plastic smell from a new shower curtain.  Atrazine is a pesticide commonly used on corn in Iowa.  There is a large dead zone in the Gulf of Mexico where fish can’t live because of Atrazine run off.  Tributyltin is a fungicide that enters through our water supply.  Each of these substances correlate with increased rates of obesity.

Cigarette smoking by parents can lead to babies born that are small for their gestational age.  Children born underweight are susceptible to obesity later in life as their bodies try to metabolically “catch up”.
With all these different chemicals in our water, air, and food that increase the number of fat cells in our body, the idea that obesity is a byproduct of sloth and gluttony is ludicrous.  Imagine a newborn baby drink a soy formula that is over 10% sugar that has the compound genistein that is found in all soy and it is drinking it out of a plastic bottle with BPA.  That baby has the deck stacked against it long before it has the ability to make any choice about what it is eating or doing.