Eat Less By Changing What You Eat

I have spent the last few days talking to a friend of mine about her weight.  Never an easy subject but one I’ve gained a little expertise in since I have lost 200 lbs.  The latest obesity stats came out and they say 75% of American men are overweight or obese and when you figure roughly 15-20% of people don’t have the body type that allows them to get fat, this means that pretty much everyone is fat.  Of course not everyone is fat but the percentage of people that have a significant amount of weight to lose keeps rising every year.

So in the course of talking to this friend, she just couldn’t get over the idea that weight loss is primarily a calorie issue.  A firm believer in the “Eat Less, Move More” ethic that has been figuratively shoved down our throats for decades, the idea that she could just remove carbs from her diet and the weight would fall off was absolutely foreign to her.  I would have had an easier time telling her that pigs can fly than convincing her that she didn’t need to count calories to lose weight.

That can be a hard pill to swallow because most of us have actually lost weight by eating less for a short amount of time.  Whether it be in a program like Weight Watchers or just cutting out desserts and never going back for seconds, we’ve all done it until we stopped doing it and watched the pounds come back on.  Yo-yo dieting is real and a pain in the posterior to deal with.

But here’s the deal.  While I am a HUGE believer in this hormonal path to weight loss where you lose weight simply by limiting insulin as much as possible, calories aren’t meaningless and I think this is where the 2 sides of this debate talk past each other.  This was a part of the conversation I hadn’t gotten worked out in my head when me and Mike Israetel went back and forth at each other on my podcast.  Can you lose weight by limiting calories?  Absolutely.  Are you more prone to fail by approaching calories first?  I think so.  Sure there will always be the iron-willed who are able to stick to a diet for the years it takes to lose a significant amount of weight but for most of us, that just isn’t in the cards.

Calories are Important but Not Primary

But here’s the other thing I’ve learned over these last few years, calories matter.  I know this is true because when I plateau, the only thing that helps is to either cut calories or do a little more exercise.  So where does this leave us?  It leaves me with the certainty that calories matter but every time I chase calories, I fail.  But if I instead concentrate on keeping insulin low and only eating when hungry, the calories take care of themselves.  It’s a hard concept to convey but an important one, calories are a factor but not the primary factor in weight loss.  The primary factor is not eating anything that spikes insulin and keeping hunger sated with fat.  Once those criteria are met, I can use my caloric intake as a lever that controls my weight with a fairly high level of control and precision.

3 Steps to Breaking Through a Plateau

Let’s say you are a long-time reader of this blog and have been eating LCHF or Keto for a while.  You’ve lost weight but you’ve hit a snag.  The weight isn’t coming off as easily anymore and you aren’t sure what to do.  Here’s a quick rundown of the steps you should take.

It’s not perfect and you might be surprised at how much tweaking you have to do to lose the last 20-40 lbs but it is totally possible.

And most importantly, reach out if you have any question.  I love to help in any way I can.  You can join the FaceBook group linked below or just leave a comment, I promise I’ll see it and do my best to respond. 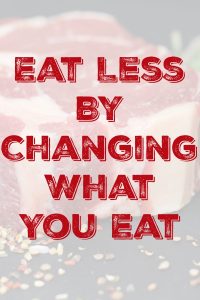 3 thoughts on “Eat Less By Changing What You Eat”