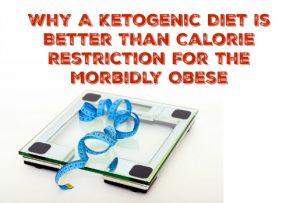 This weekend, I released a podcast where I interviewed Dr Mike Israetel of Renaissance Periodization where we discussed a ketogenic diet vs a calorie restricted diet for weight loss.  There was a bit of a kerfuffle on his FaceBook page and I think some of the people over there made enough good points that it merited a separate blogpost to answer some of the objections.

You Are Just Using a Ketogenic Diet to Restrict Calories!  It’s the Calorie Restriction That is Causing the Weight Loss, Not The Ketogenic Diet!

First of all no one is debating this, a well-formulated ketogenic diet does result in a calorie deficit because a ketogenic diet does a much better job of suppressing appetite than a typical American diet but I think people who say this are missing the point.  If you are investigating a plane crash and I asked you why the plane crashed, you could answer that gravity pulled the airplane to the earth which caused the plane to crash.   That’s certainly what happened but it doesn’t answer my question.  When I ask you why people get fat and you say it’s because they ate too many calories, you haven’t really answered my question.

What we are trying to get at is the underlying reason we are eating so many calories to our own harm.  No one sets out to be 400 lbs, it just kind of happens over time but what is the mechanism that causes weight gain year after year when obesity did not use to be the problem it is now?  Something has changed in our environment that is causing this and I think the evidence points towards not on increase in total calories but an increase in added sugar to our foods which leads to increased insulin levels in our bodies.

It’s the insulin levels that cause weight gain not only because it is an important hormone in the process by which we store excess blood sugar as fat but also because the body has a hard time pulling fat out of long term storage when insulin levels are high.  It’s far easier for the body to release the ghrelin hormone which drives hunger and causes you to eat, which tops off your blood sugar level rather than do the hard work of breaking down stored fat for fuel.

Opponents of the ketogenic diet say it only works because you are restricting calories and we would say it is exactly the opposite.  I can restrict my calories and control my appetite because the ketogenic diet suppresses my insulin which causes lower levels of ghrelin (the hormone that stokes hunger) and greater sensitivity to leptin. (the hormone that causes feelings of satiety)  While it is certainly possible to eat so much food on a ketogenic diet that you don’t lose weight (one of the reasons I had to get rid of the can of nuts on my desk) it is a heckuva lot harder to eat more calories than you should on a high fat diet.

This might be my one regret about the interview, (well, that and leaving off the Dr on the title card) but it came from a place of not wanting to be rude to my guest or flat out say he was wrong but now that I’ve had some time to consider the objections, I realize I should have done a better job in this area.  As for the science, I am just not going to do a better job at than what Drs Phinney and Volek have done with their 2 books, or what Dr Lustig did in Fat Chance, or what Gary Taubes did in Good Calories, Bad Calories.  In fact, if you really want to to see the science behind exactly where this obesity epidemic came from, I recommend you start with Gary Taubes.

But if I had it all to do over again, I would have tried to do a better job making one important point.  The rules for weight loss are different if you have 20 lbs to lose vs if you have 200 lbs to lose.  I’m not saying that calorie restriction doesn’t work, I’m saying that someone who is morbidly obese has a MUCH harder time staying on a calorie restricted diet than someone who isn’t.  The fact of the matter is, people who are morbidly obese are not paragons of self-control who can eat 500 less calories a day for the multiple years it will take to lose 200 lbs.  Are there some who have done it?  Of course, but not too many.  Now if you can afford to hire some like Dr Mike Israetel or someone from Renaissance Periodization to assist you, keep you accountable, make you meal plans, and do all the other things that are helpful on a diet, then more power to you.  I am sure that increases you chances of success by a wide margin but for the average guy that is morbidly obese, we need something a lot easier.  Which brings us to the next objection.

Keto Is Great If You Are Lazy

First of all, any one that embarks on any health journey and has success is far from lazy.  Let me tell you, while keto might be the easiest way to lose weight, it’s still not easy.  It is hard work to move that needle every morning and I applaud anyone who conquers obesity in whatever way works for them.  This struck me as a disrespectful way of saying that keto is “cheating” and that people who exercise 2 hours a day are somehow morally superior to those of us that simply do not have the time necessary to train for a weight lifting competition or run a marathon.  You put the health of someone who was once morbidly obese and lost 100+ lbs through calorie restriction and large amounts of exercise against my health and I feel confident I can hold my own.  Exercise isn’t needed to lose weight on keto but for the first time in my life I want to exercise because I can actually use my stored fat for fuel instead always being in “fat storage” mode with high levels of insulin.

The most important difference between these 2 ways of approaching weight loss is with keto, eating less and exercising more are the end results, not the means by which you get there.

I Am a Douche

The internet certainly brings out the best in people.  A common complaint was that I shouldn’t have restated my case at the end of the podcast and it was disrespectful to Dr Mike.  I’m sorry if you feel that way but keep in mind that here was a week between the interview and when I recorded that last bit so I had some time to think about what he said.  I don’t take everything at face value and took the time to genuinely consider his points but found them wanting.  If I had 20 lbs to lose and wanted to train to increase my athletic performance, I would absolutely take Dr Mike’s advice to heart and do what he says but that’s not my story.  I needed something that would get the weight off quickly (If I did his protocol of 12 weeks calorie restriction, 4 months maintenance it would be maybe 5 years before I lost what I lost in less than 2 years on keto) because I was in real danger of a heart attack or some other life threatening event.  Also, in all this talk of weight loss, we haven’t discussed the other benefits of keto I’ve experienced such as a drop in my blood pressure that preceded any change in my weight, a reduction of my asthma, less joint pain, more energy, and a perfect cholesterol panel and A1C.  Those last 2 happened after a few months but the other benefits happened in a matter of days.  I will never forget seeing my BP drop almost 30 points in 2 weeks just by not eating sugar.  (My wife also reminded me that I stopped snoring)

The interview was great and the discussion that happened afterwards was enlightening but I think I’ll stick with what works but I’ll leave you with this final thought.  Is it possible, just possible, that the reason calorie restriction works is because in the course of restricting calories you are also restricting insulin and reducing the load on your liver by making it so it doesn’t have to process as much fat and carbs at the same time?  Could we all be like the blind men touching the elephant, all describing different aspects of the same animal?  I think if this debate is ever settled once and for all, we might be surprised at how much each camp had in common.

UPDATE:  Reading over the comments I realized I missed another question that came up.  At one point in our conversation I mentioned that when I eat carbs, I am heavier the next day and Dr Mike said that was because of water retention.  I didn’t push back at the time because I knew that carbs cause water retention in the muscles but that doesn’t matter.  You can’t say that 170 lbs lost is due to a loss of water weight but more importantly, the weight stays on for far longer than it should if it is just water.

On Thanksgiving I had a few spoonfuls of sugar free sweet potato crunch and I think I had another helping the next day.  Friday morning I had gained 5 lbs from Thursday morning and now that I am back to my normal ketogenic and reduced calorie diet, the weight hasn’t moved for about 5 days.  This is because I’m not retaining water (maybe a little but certainly not 5 lbs and certainly for this long) but because I am so insulin resistant, even a small amount of carbs triggers a massive insulin spike which makes it impossible to lose weight until it finally subsides, usually in about a week.  It’s not the calories alone that control whether or not I lose weight, my insulin levels are a crucial factor in my weight loss but (and here’s the crux of the matter) if I focus on calorie restriction but keep my insulin levels high my rate of weight loss is slow to non-existent and if the past is any way to judge, I will give up at some point in the process.  But if I keep my insulin levels low by avoiding carbs, I get calorie restriction thrown into the bargain.