How to Break Your Sugar Addiction–Step 2: Eliminate Bad Habits 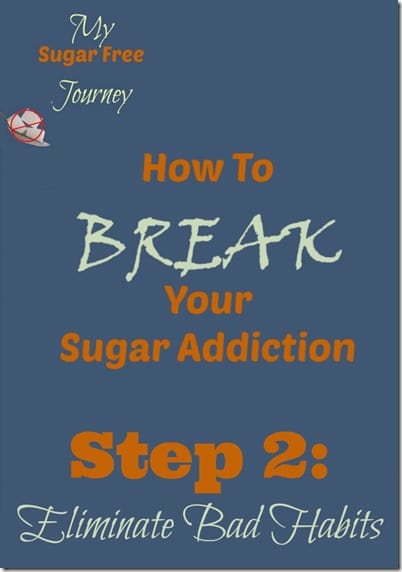 So we’ve looked at a 5 step process to break the sugar addiction and discussed how crucial it is to have the right attitude, now let’s look how to eliminate habits associated with eating sugar.

You know, before this whole process started with me, I would have bet you money that I really didn’t eat much sugar.  I mean sure I had a candy addiction but I had switched to Diet Coke years ago (Now it’s Coke Zero), I didn’t put sugar in my tea and didn’t eat too many sugary snacks.  Now I look back on what I was eating and wonder how I didn’t get bigger than I did.

What I didn’t realize was that I had so many sugar habits.  Little ways that I would add sugar to my diet every time I did certain things that would add up.  What was so important for me to do was to identify the “triggers” or what I was doing while eating the sugar.  Here are a few examples.

An on and on it went.  Once I identified the habits I had developed over the years, I was ready for the next step.

Once I could clearly see the areas that could trip me up, I had to start making a plan to get around these areas where I could easily be tripped up.  Here’s what I did to break those old habits.

So once I took a hard look at what I was eating and when, I could systematically go after each of my problem areas and create a plan of attack that would help me make it through the day without being tripped up by my sugar addiction.  All it took was just a few weeks of being careful before I was able to break my addiction.  Now the thought of smearing sweetened peanut butter and sugar filled jelly on to a piece of bread made with sugar has absolutely no appeal to me at all and the thought of eating an entire Snickers bar turns my stomach a little.

You can do this also!  Take a look at what you eat, figure new ways to eat that don’t involve sugar and stick with it for just a few weeks.  Once the hold that sugar has on you is broken, you won’t want it anymore.

Have you made the plunge to the No Sugar life?  Let me know in the comments below!

4 thoughts on “How to Break Your Sugar Addiction–Step 2: Eliminate Bad Habits”